Our first selection for 2014 is….America’s War:  Talking about the Civil War and Emancipation on Their 150th Anniversaries. 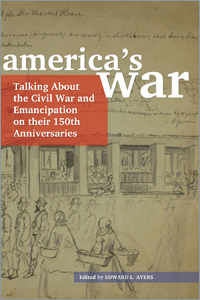 Edited by Edward L. Ayers, America’s War is an anthology of Civil War writing originally published between 1852 and 2008. Co-published by the American Library Association and the National Endowment for the Humanities, America’s War was created in support of a national reading and discussion program for libraries called “Let’s Talk About It: Making Sense of the American Civil War.”

We think this work is important for our book group members – we will discuss Texas’ role in the Civil War with our next book, but believe it is significant to look at this anthology of works to understand the many different aspects of the war.

Our friends at Humanities Texas attained this book, as well as Geraldine Brooks’ March and James McPherson’s Crossroads of Freedom:  Antietam and have been gracious enough to provide us with several free copies!

Comment below, “I would like a free copy,” and be sure to email your name and mailing address to bookgroup@texaspbs.org.  A complimentary copy of March and Crossroads of Freedom:  Antietam will be sent with our book for discussion, America’s War:  Talking about the Civil War and Emancipation on Their 150th Anniversaries.

Be sure to get your copy soon – our expert, Dr. Carey Latimore of Trinity University, will chat with us on February 26th!

One Response to “The Book Group is back!”